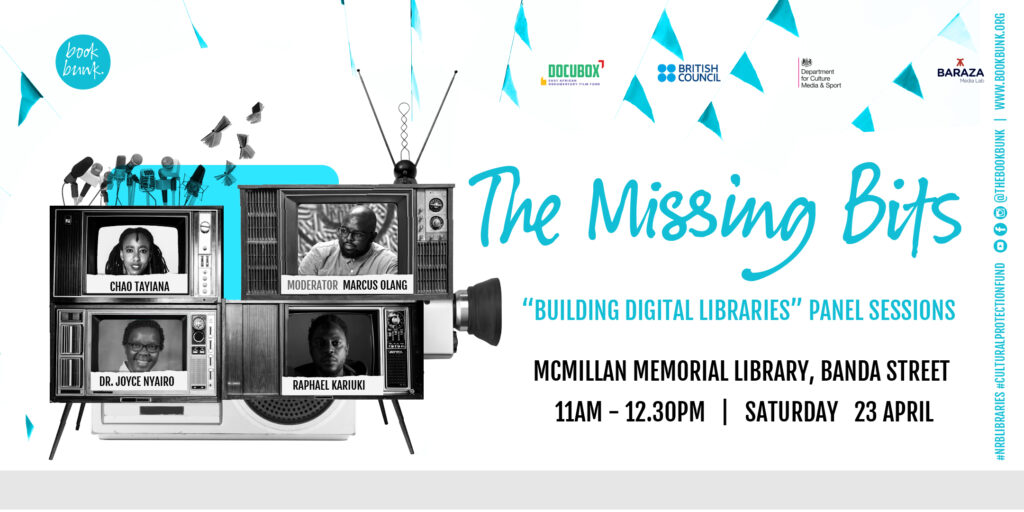 Galleries, Libraries, Museums & Archives play an invaluable role in documenting and preserving cultural heritage, and in some sense, actually creating a sense of who we are. But the curatorial decisions of what’s included and what’s left out, of what’s preserved and what’s left to decay, is very much a question of power, rather than a purely aesthetic one. The digital age we’re living in presents more possibilities for archiving materials, but it’s also one in which the question of curation and power requires an even more thoughtful approach. This panel will explore the work of digital libraries and archives in capturing cultural memories in the past and in our present, the challenges – and innovative approaches to overcome them that archivists are leaning on, and the lessons we can learn from global libraries in this regard.

Chao Tayiana Maina is a Kenyan digital heritage specialist and digital humanities scholar working at the intersection of culture and technology. A computer scientist by profession and a historian by passion, her work focuses on the preservation, engagement and dissemination of African heritage. She is the founder of African Digital Heritage, a co-founder of the Museum of British Colonialism and a co-founder of the Open Restitution Africa project. She holds an MSc International Heritage Visualisation (distinction), a BSc Mathematics and Computer Science and is a recipient of the Google Anita Borg scholarship for women in technology.

Raphael Kariuki, aka Dj Raph, is a sound artist and music producer based in Nairobi. Together with sound artist Sophia Bauer and data scientist Brian Muhia, they founded Sound of Nairobi (soundofnairobi.net), an online archive of Nairobi’s sonic environment as a resource for artists and researchers.

Dr. Joyce Nyairo is an independent researcher who works on cultural memory projects. She has over thirty years’ experience in nurturing artistic and cultural creativity through academia (Moi University), grant-making (Ford Foundation) and publishing (Santuri Media Limited). A regular columnist in the Daily Nation, Dr. Nyairo’s writing interrogates the interface between politics, identity and culture. She has published on these subjects in referred journals such as African Affairs, Journal of African Cultural Studies and Journal of Eastern African Studies. In 2007 she co-edited the groundbreaking study, Urban Legends, Colonial Myths: East African Popular Culture and Literature and in 2015 she released Kenya@50: Trends, Identities and the Politics of Belonging.

Her other memory projects include two memoirs which she has helped write and publish – Dare to Defy (2018) and Endurance: Memoirs of a Kenyan Painter (2019). More recently, she was a writer and co-editor in the Goethe Institut’s volume, Ten Cities Clubbing in Nairobi, Cairo, Kyiv, Johannesburg, Berlin, Naples, Luanda, Lagos, Bristol, Lisbon, 1960-March 2020 (2020) a study of club culture and dance music that explores the relationship between nightlife and creativity. Her latest publication is “The Wrath of the Cartoonists”, a chapter in Charles Onyango-Obbo’s book, Pioneers, Rebels and a few Villains – 150 Years of Journalism in Eastern Africa which was funded by Konrad-Adenauer-Stiftung.

Dr. Nyairo was a lead consultant on the Volkswagen Foundation’s research program “Negotiating Culture in the Context of Globalization” and currently, she is Co-Director on a project to assess character values and youth initiation programmes in Kenya, funded by the Templeton World Charity Foundation (TWCF).

Marcus Olang’ is a human with one primary passion: Threading stories of people, cultures, places, and things, through his photography and his writing.
His present focus is in story-threading, an ability of his honed and polished over his extensive track record in communications – from his experience in radio (both on air and behind the scenes), to his capacities cultivated in communications in both copywriting and strategic communications planning.
He is presently also the chief photographer at Stills by Marcus, with a body of work spanning 8 years thus far. His photography style focuses on a candid approach, creating a documentary and slice-of-life feel to the final output.
In his personal writing, he focuses on social commentary, while his commissioned work covers a breadth of issues, from behaviour change communication campaigns, to offering consults and expertise to social enterprises working in different parts of Africa.